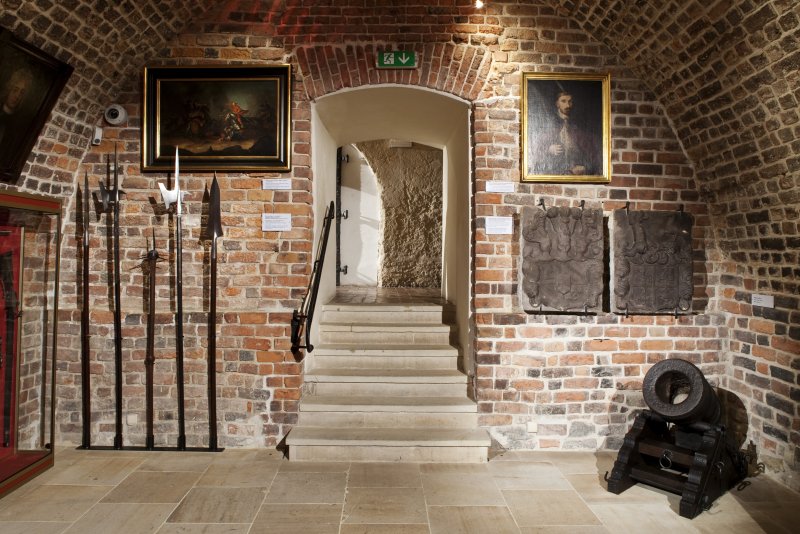 The Armoury is situated in the gothic cellars of the castle. In six successive arched rooms and in the adjoining corridor European and oriental armaments dating from 16th to the beginning of 20th century are presented. The Armoury exhibition consists of offensive and protective weapons as well as hunting, sport and duel weapons. The largest group of weapons is small firearms such as riffles, shotguns and pistols equipped with fuse, wheellock, flintlock, caplock, and needle mechanisms. The most interesting are small-bore lavishly encrusted riffles for game birds and animal hunting, produced in Cieszyn and therefore named “Cieszynka”. Exhibited riffles are dated to the second half of 17th century. A second group of armaments are mostly military side arms. 16th and 17th century swords, rapiers and épées are presented, as well as backswords, sabres and broadswords, dating between the 18th and 20th century and used by different European armies, including the Polish army (e.g. the 1917, 1921, and 1934 sabres). Other interesting exhibits are executioner’s swords designed especially for decapitation of condemned criminals. On their blunt-ended blades Latin maxims are engraved, such as: IURIS VICTORIAE (Justice shall prevail), or as on the 17th century sword of the city of Pszczyna – RECTO FACIENDO NEMINEM TIMEAS (In acting justly fear no one). Presented polearms are mainly halberds, partisans (dated 16th to 18th century), and long cavalry lances (dated 19th to 20th century) used by infantry and castle guards. An interesting group of weapons are also hunting and target crossbows, some of them decorated with incrustations presenting figural representations. A production date of the oldest Renaissance crossbow is 1534. Some of the examples of defensive weapons are a full-body armour dated to 1530, Polish hussar cuirass from the end of the 17th century, a closed helmet, morions (dated between 16th and 17th century), as well as cuirassier helmets and breastplates from the 19th century. Among the objects of Polish military tradition there is a gilded gorget with a painted picture of the Black Madonna of Częstochowa dating to the Bar confederation period (1768-1772), and two sabretaches: one belonged to the Duke of Pszczyna, Fryderyk Erdmann Anhalt-Köthen-Pless, and the second one with a silver cover and the coat of arms of Nałęcz. In one of the armoury rooms oriental armaments are presented, dating back mostly to the 18th and 19th century. For example there can be found: an armour, helmets, a shield and Persian sabres, pistols and yatagans of Turkish and Balkan origin, Japanese swords (katanas) and samurai armours. A group of more modern weapons from the second half of the 19th and 20th century are relatively strongly represented. During the World War I German headquarters was stationed in the Pszczyna castle.

Armaments from that period are: breech-loading riffles: single-loaders and repeaters, an interesting example of a mine-thrower, a double-barrelled machine gun, and 1914 heavy machine gun Fiat; and Austrian, Prussian, French and Russian sabres. Historical paintings are another part of the exhibition: the war headquarters of the emperor Wilhelm II with the castle in the background (painted by A. R. Benno), a portrait of the duke of Pszczyna Hans Heinrich XV von Hochberg, an adjutant of the emperor and his wife, Princess Daisy as a Red Cross nurse. During World War I the Princess brought help to many prisoners of war. In the Armoury sidearms such as sabres are also presented, which were used in the Polish Army in fighting for Polish independence in 1918. There are sabres of both foreign and Polish origin (models: 1917, 1921 and 1934). Worth noticing are also paintings of Polish uhlans by Wojciech Kossak and Stanisław Ligoń, and a cast bronze plaque with a bust of the Marshal of Poland Józef Piłsudski originating from a monument formerly standing on the market square in Pszczyna. Moreover, a part of the Armoury exhibition is sport sidearms and firearms, duel pistols, shooting targets, photographs of documents and members of the pre-war Bractwo Kurkowe in Pszczyna. 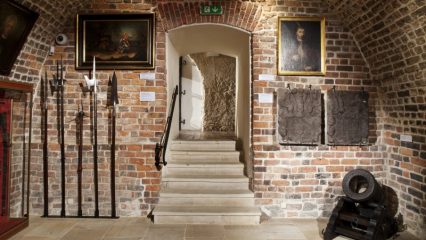 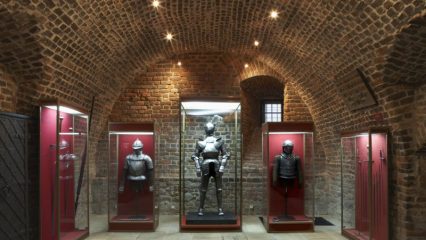 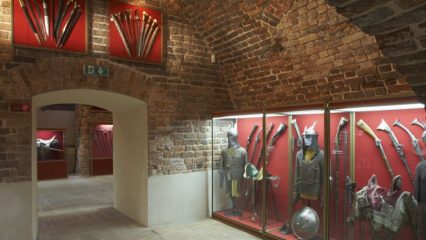 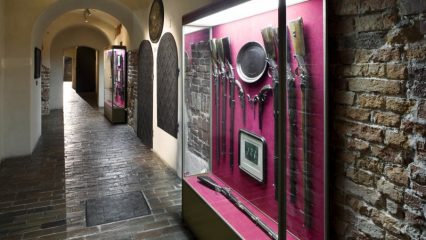 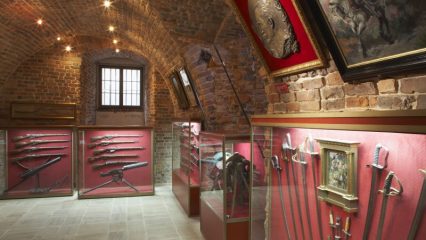