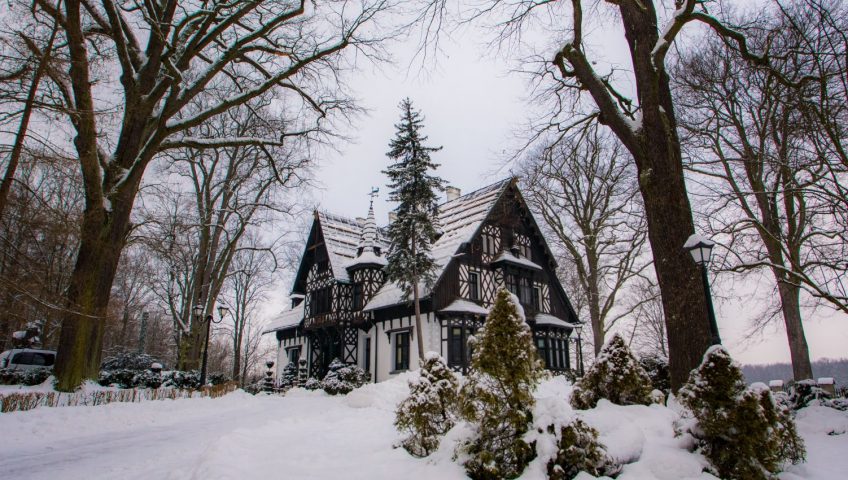 Overview of the History of the Hunting Lodge in Promnice

The forests of Pszczyna – carefully tended and preserved, mainly thanks to two owners of the Pszczyna Castle estates, Friedrich Erdmann, Prince of Anhalt-Köthen-Pless, and Hans Heinrich XI von Hochberg – were abundant in wild game and birds. Erecting the Hunting Lodge of Promnice located in the village of Kobiór on Lake Paprocany was closely associated with the hunting passion of the Counts von Hochberg, and to enable reception of highly eminent guests invited to shooting parties organised in the Pszczyna Forest. The Lodge was visited i.a. by Wilhelm I Friedrich Ludwig von Hohenzollern and by Wilhelm II. It was also a favourite recreation spot with Hans Heinrich XV von Hochberg’s wife – Mary Therese Cornwallis-West (Princess Daisy von Pless).

The purpose of Lodge, initially dubbed the Hunting House (Jagdhaus), then Hunting Castle (Jagdschloss), was to inherit the role of the so-called Hunting Manor (Jägerhof), demolished in 1830, formerly located in the immediate vicinity of the Castle of Pszczyna (across from the Castle gardens), built in the times of the aforementioned Friedrich Erdmann, Prince of Anhalt-Köthen-Pless.

Royal national constructor Olivier Pavelt, the architect behind numerous edifices in Pszczyna in Hans Heinrich XI von Hochberg’s employment, was the author of the architectonic design of the Lodge.

The year the facility was built (1861) coincided with the particularly active construction period of 1861-1876.

The Lodge Pavelt designed was the focal edifice of a larger complex, comprising a coach house, stables, and a forester’s house. The current shape and image of the Lodge has evolved in two construction stages: in 1861 (early construction stage), and – chiefly – in 1868, when the facility was extensively reconstructed after the fire of 1867; further minor amendments were added in the late 19th/ early 20th century.

The timber framing structure (referred to as the “Prussian wall” in Poland), also known as the “Tudor style”, typical for German renaissance architecture, Tyrolean construction, and so-called Swiss style, blended in with numerous neo-Gothic components, chiefly in architectonic detail. Hunting ornaments – antlered deer heads embellishing the Lodge’s exterior – were a visible accentuation of the building’s purpose.

The Lodge featured a number of properties typical for hunting developments, such as the mélange of assorted construction styles, game surveillance tower dominating over the entire edifice, grand entrance foyer and enormous dining hall with a uniform décor theme referencing knighthood and hunting symbols, and large-scale use of wood as construction material. Lodge interior space was meticulously arranged, individual storeys assigned separate roles. The ground floor served representative reception and private lodging purposes; guests’ and children’s quarters were located on the first floor; servants occupied rooms in the gabled attic; cellars were used as household space. Semi-official in nature and free of the rigid courtly etiquette, the Lodge was a perfect choice for recreation, where the princely family and their guests could enjoy rest and a hunt.

The Lodge survived a mere six years in aforementioned form – the fire of 1867 well-nigh destroyed the entire building. Construction works to drawings delivered by carpentry master Asser were supervised by chief building works master Boehme. Interior joinery works to Pavelt’s drawings were commissioned with joinery master Friedrich Rehorst. A further set of drawings – in all probability by Pavelt as well – were provided to sculptor Plischke of Freiburg (today: Świebodzice), responsible for interior stone masonry works. The entire project was supervised by aforementioned Olivier Pavelt. In the course of construction works, a figural group cast in zinc, rendering of the patron saint of Hubertus with a deer by Jan Janda, was set up in front of the building. The sculptor gave Hans Heinrich XI von Hochberg’s facial features to the saint.

Works engaged in at the turn of the 19th and 20th centuries were primarily intended to modernise the castle. Many changes were introduced upon Hans Heinrich XI’s death, which was when the Princess Daisy decided to give a more vivid touch to the interior by introducing furniture upholstered in bright colours, and painting the walls in light colours. A small food-transporting dumbwaiter was put in. Electricity was installed. The décor of most rooms was made more lavish.

In August 1934, the furnishings of the Pszczyna Castle and Lodge in Promnice were sold at auction, both facilities made subject to state receivership; one year later, they were reinstated as Hochberg property. Until 1938, the Hunting Lodge in Promnice was owned by the Hochbergs, upon which it was transferred to the state as part of an inheritance fee imposed upon sons of the late Hans Heinrich XV as a condition to their succession. After World War Two, the Hunting Lodge in Promnice was managed by the District State Forest Authority in Katowice. In 1967, its care was entrusted to the mining ministry and sector. It became state property in 2003. As of 2018, the building and its grounds have been part of the Castle Museum in Pszczyna estate.